The number one biggest question that impacts your wedding day timeline is do you want to see each other before the ceremony- a “first look”? The decision is an intensely personal one.  So how do you decide?

Above all, consider what feels right. Shut out all other voices and listen to your guts- yes, talk to your partner about this too! What are your goals for the day? What do you value most? 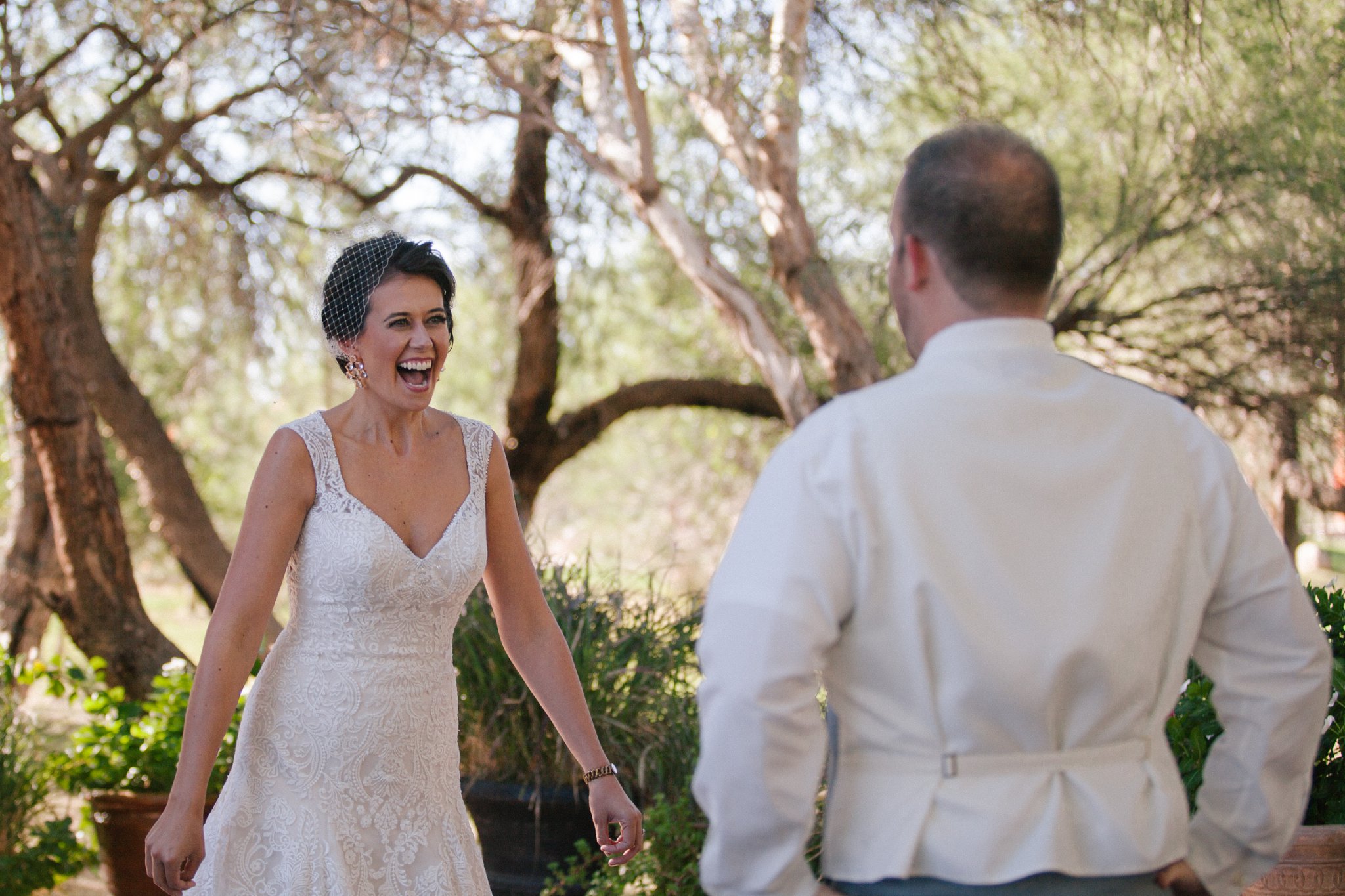 A first look may be a better option for you if:

If one or both of you are very very shy and may shut down emotionally in front of strangers.

It’s incredibly nerve wracking and vulnerable to be emotional in front of strangers. Being vulnerable is very brave (see Brene Brown’s amazing Ted Talk on vulnerability) but it’s especially challenging for men. Everyone is watching them for a reaction, and men are typically taught to be “tough” and not show emotion, especially crying. I LOVE vulnerability & emotion, in fact that’s one of the primary reasons I shoot weddings, but many men don’t want their buddies making fun of them, even joking, about them crying, so some men shut down. Same goes for women! If either party doesn’t like being the center of attention, then consider a first look as a more private way of expressing your emotions together, getting reassurance & spending some quiet moments together before the big moment.  Worried that the first look will “spoil” the big moment walking down? In my experience & people I’ve talked to, it doesn’t spoil it at all, and sometimes I’ve even gotten reactions both times during the first look and during the ceremony. 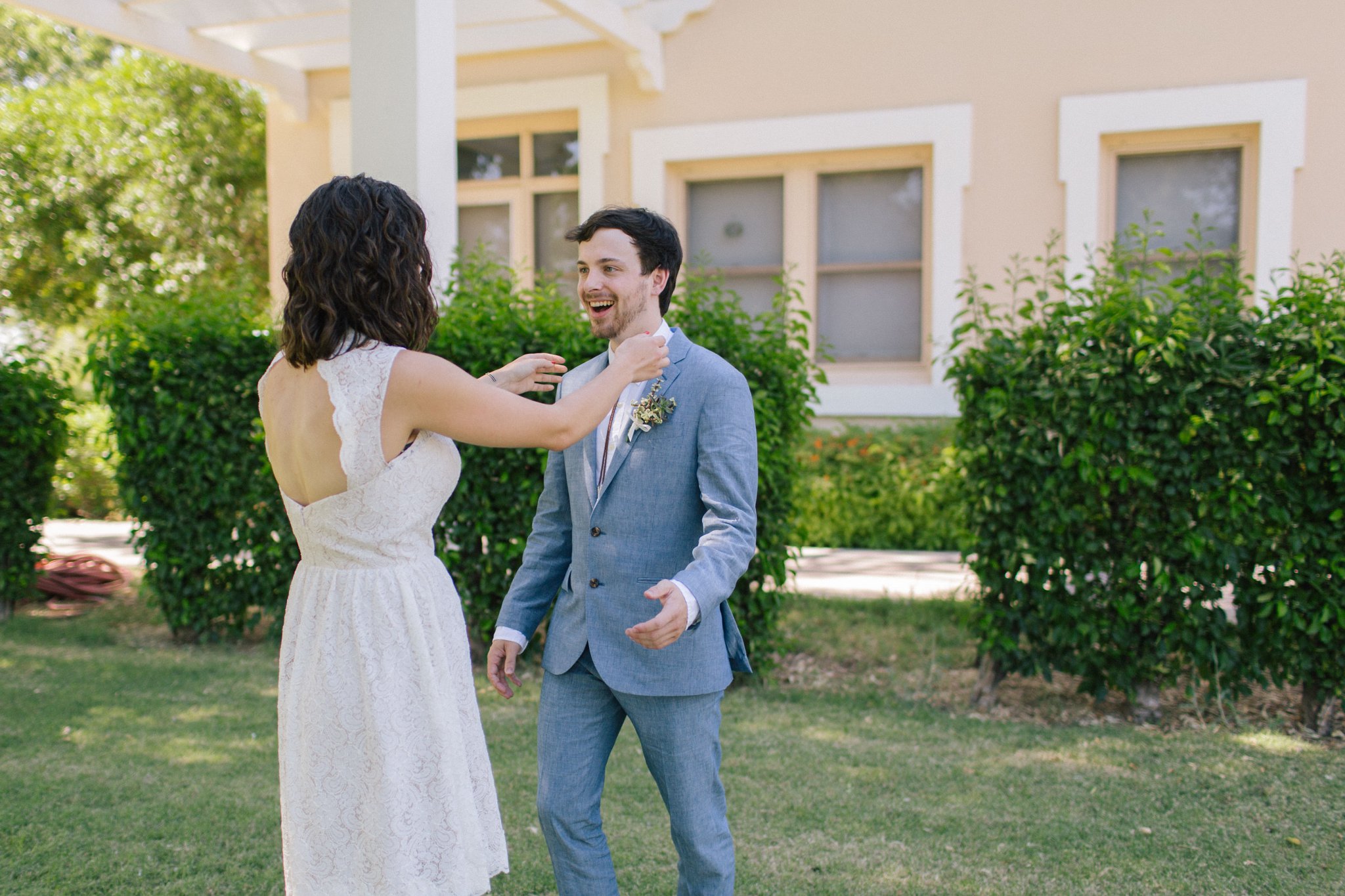 If you want to get to the party after the ceremony.

Doing a first look means you get a lot more photos done before the ceremony, leaving more time to potentially attend cocktail hour. Now, I can’t recommend highly enough taking advantage of golden hour for romantic portraits of you guys basking in the glow of newly minted marriage, but in many cases, it’s possible to get some sunset portraits AND get to part of your cocktail hour if that’s a priority to you two.

If you’re getting married in winter.
Generally from November-January, the sun sets pretty early. For Arizona, this is still prime wedding season, so with the sun going down early- sometimes even 5PM around the December solstice- that leaves you with significantly less time to get photos done before it goes down. It’s a mad rush to get everything knocked out if you only have an hour or less before the sun goes down and you didn’t get any family formals, wedding party photos OR couples’ portraits.
-If you have a very large wedding party (over 10 people besides the wedding couple) and/or a large family.
If you have a large wedding party or family, it’s usually quite a task to wrangle everyone after the ceremony. Uncle Bob or the best man inevitably wants to go get a drink, usually when we need them for portraits. With large wedding parties and/or family, it takes  longer to get everything done and if you aren’t doing a first look, that often results in having to cut couples’ portrait time. I’ve had a few situations where our portrait time was cut down to only 5 minutes before the sun was down. 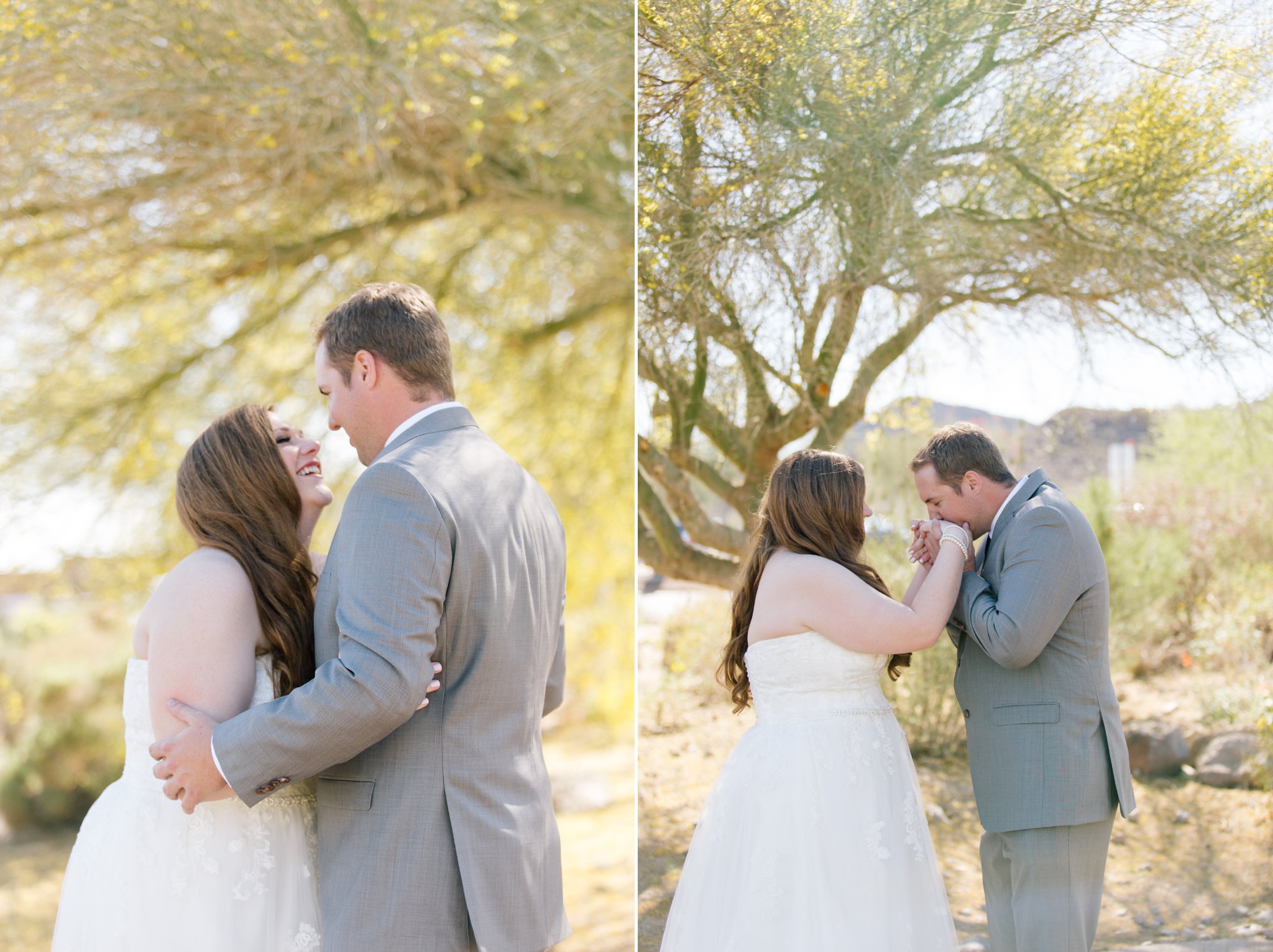 If getting a lot of couples’ portrait time in is a priority.
If you want a lot of time for couples’ portraits, it’s a really good idea to do a first look. Typically, I spend 20 minutes after the first look doing some portraits in before we start on wedding party & family formals, then we have as much time as the schedule allows after the ceremony to do romantic sunset portraits.  Without a first look, you often get your portrait time cut in half or less. 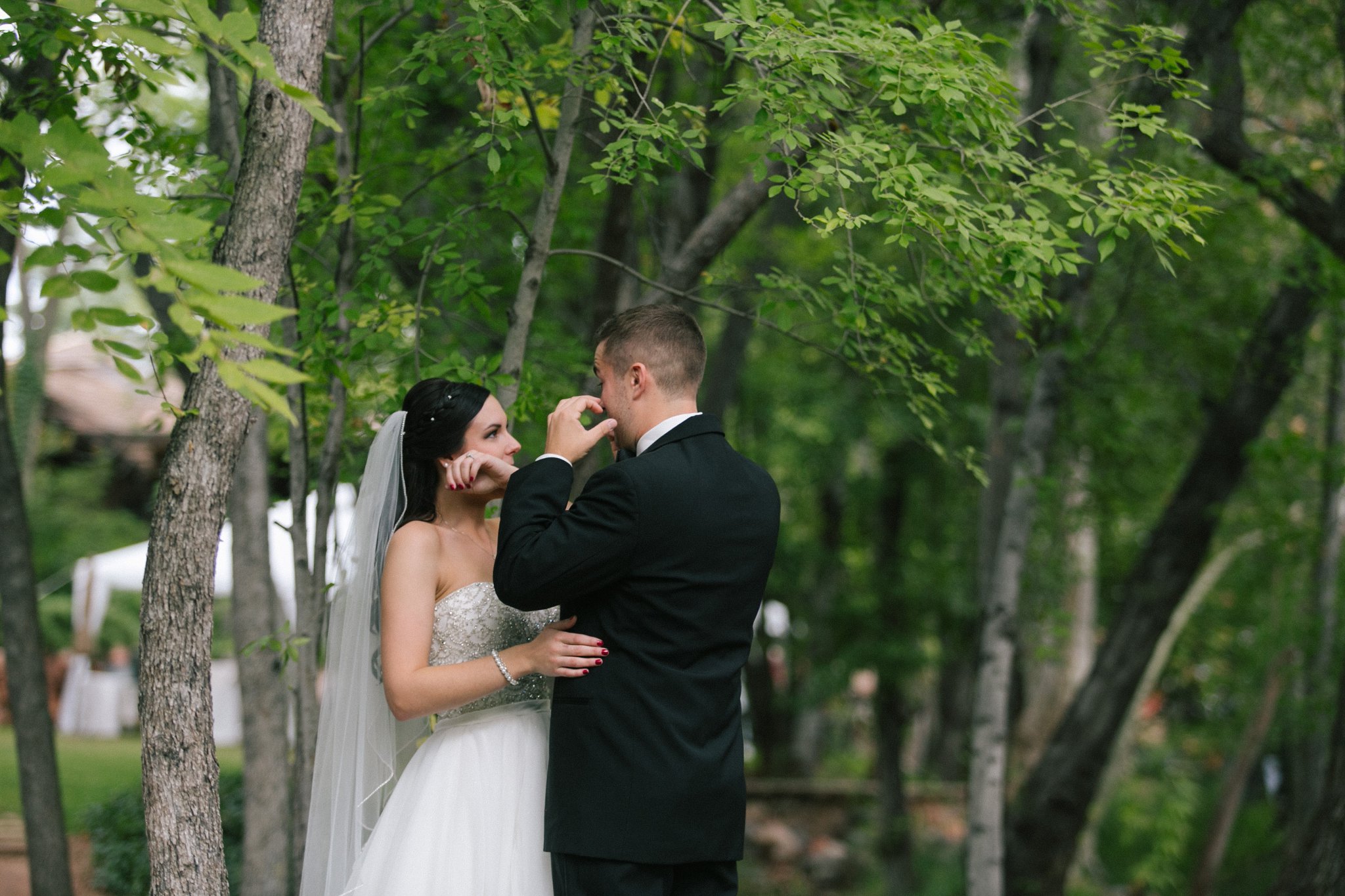 That said, I definitely understand wanting to stick to tradition. It’s entirely a personal decision! No matter what you decide, I’ll do my best to maximize the time and make everything as efficient as possible. 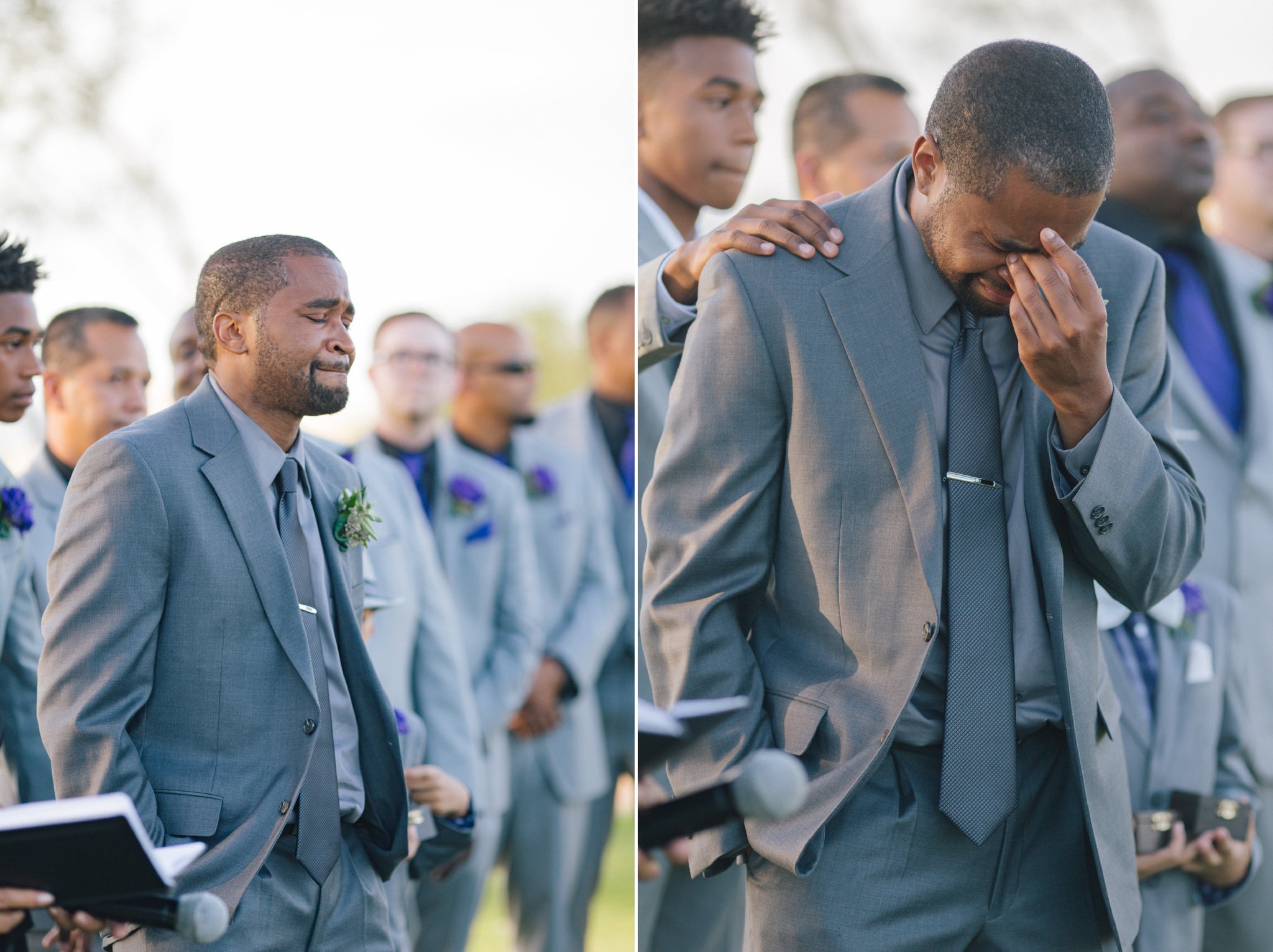 Pro Tip: An option if you want a reaction but don’t want your partner seeing you is to write each other letters. I can even set you both up back to back, or holding hands around a door as you read each other’s letters together. This is also a great idea if you want to do personal vows but don’t have the guts to read them aloud during the ceremony. Though from someone who did write her own vows (and ceremony) and is MORTIFIED of public speaking, there is something truly powerful about saying aloud your vows to your partner with your friends and family as witnesses. It’s very different from giving a speech, that’s for sure!

Most of the debate circulates around expectation of reaction from your partner. Be honest with yourself in what you’re expecting from your partner. If you’re expecting him to cry when he doesn’t cry at anything, you MAY be disappointed no matter which option you choose. He might surprise you of course, and I hope he does! But some people are just not very emotionally reactive, and that’s ok. Don’t give in to societal pressure for some grand breakdown at the sight of you if that’s not in your partner’s nature. Celebrate your own individual uniqueness and authentic relationship together.  I’ve seen people react both times at a first look AND the ceremony, and also not much of a reaction. But that doesn’t mean it’s any less impactful or meaningful to the person you are marrying. 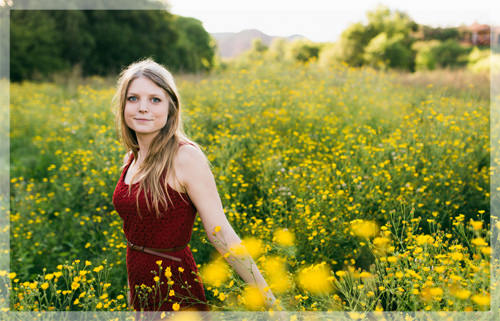